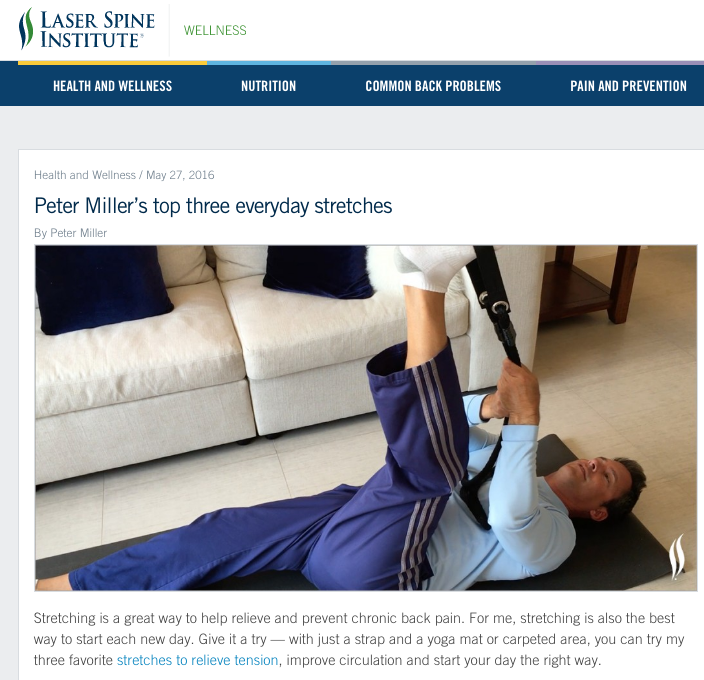 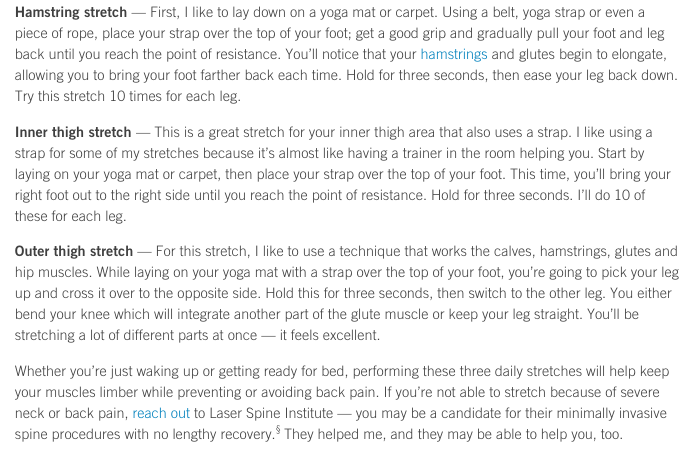 Thank you to Miami New Times for featuring me in an article: Catching Up With Fishing Champion and TV Host Peter Miller! 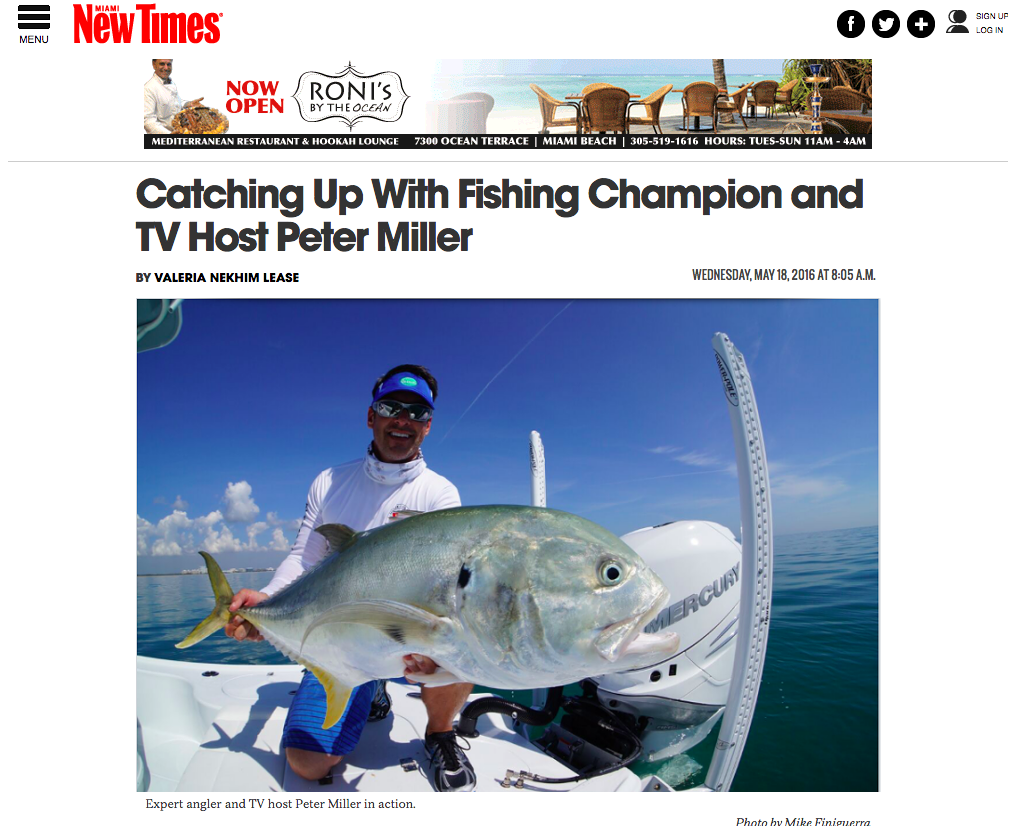 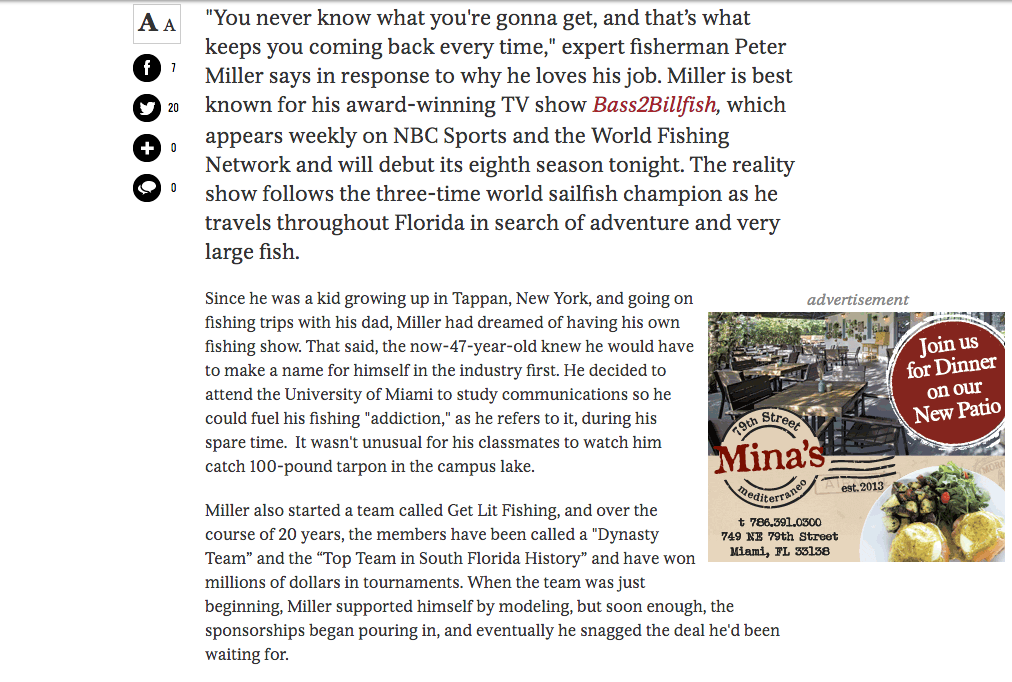 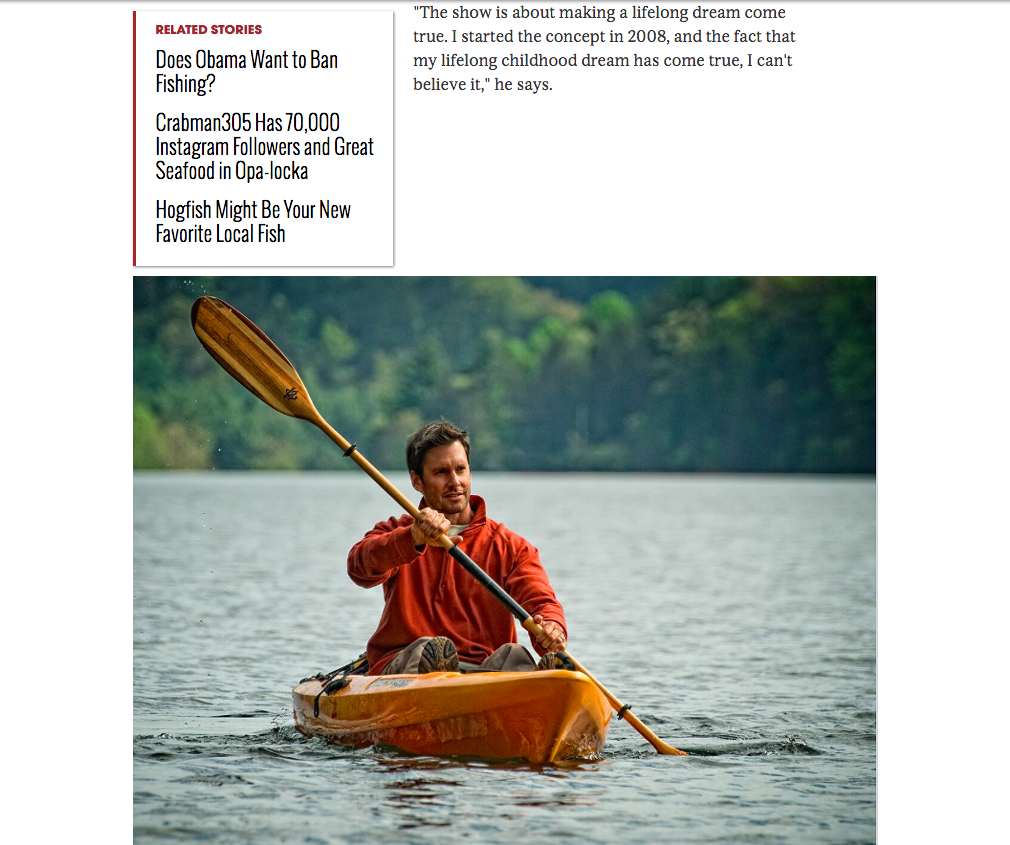 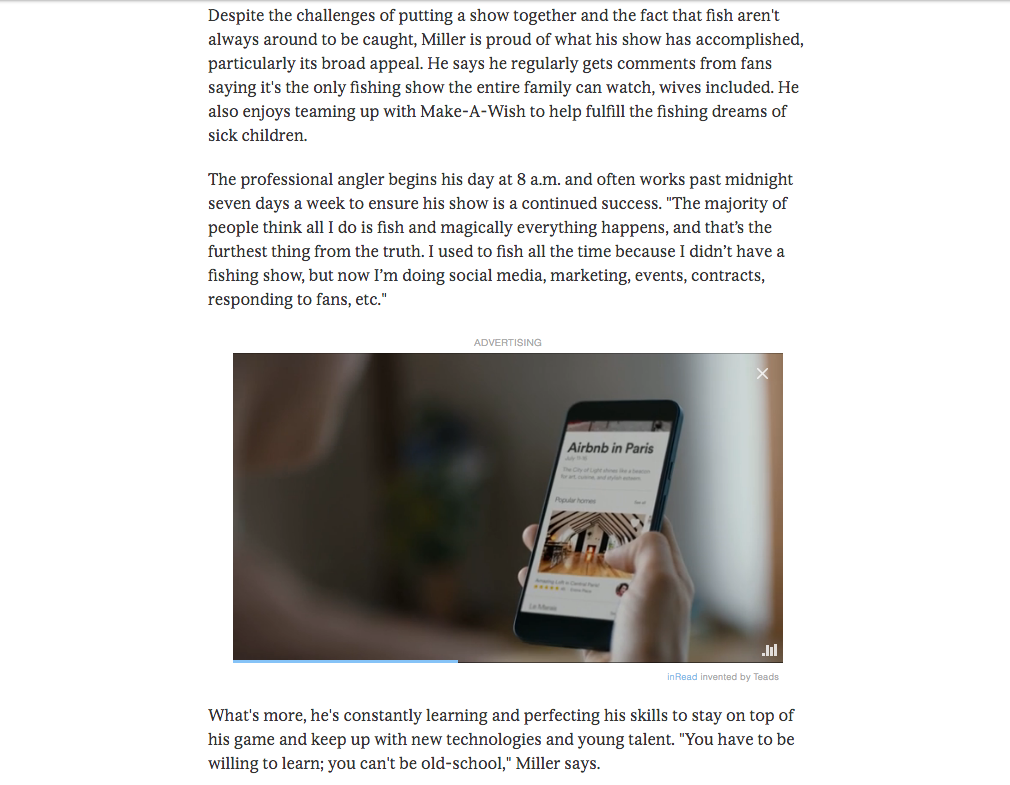 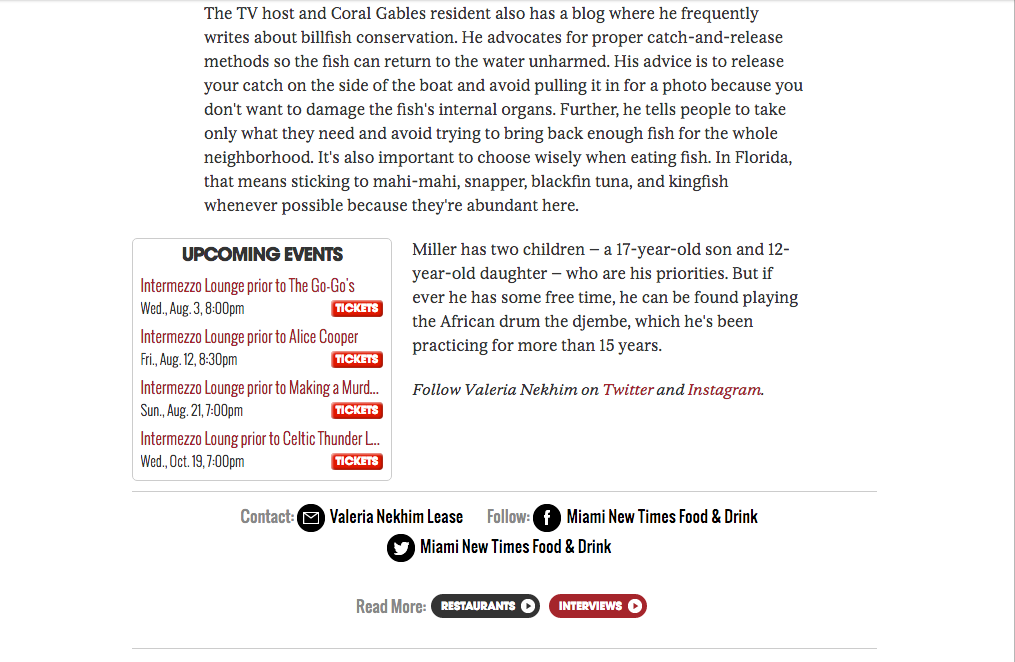 I recently had the honor of being featured in Pinecrest Magazine. Check it out below!

For the original article, visit this link: http://lmgfl.com/7-questions-with-peter-miller/ 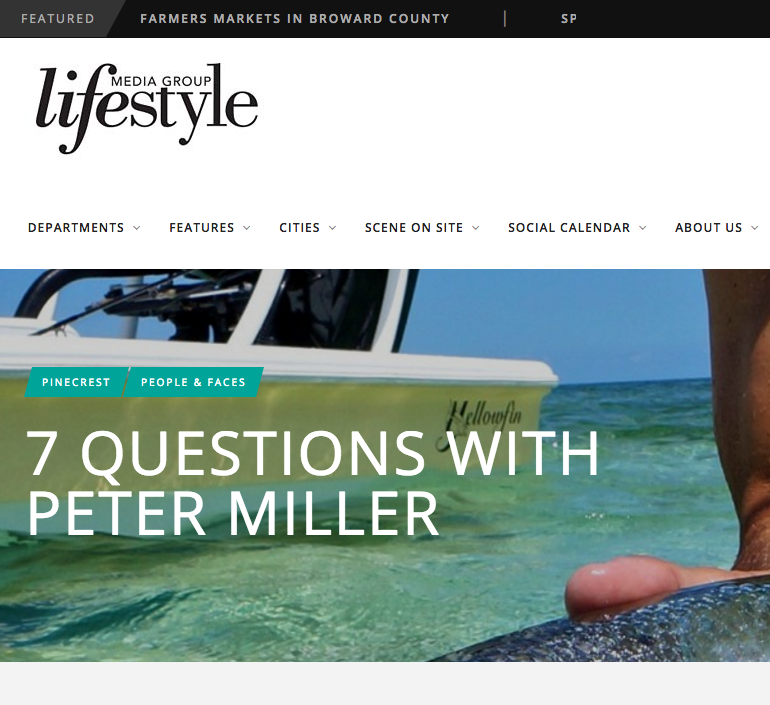 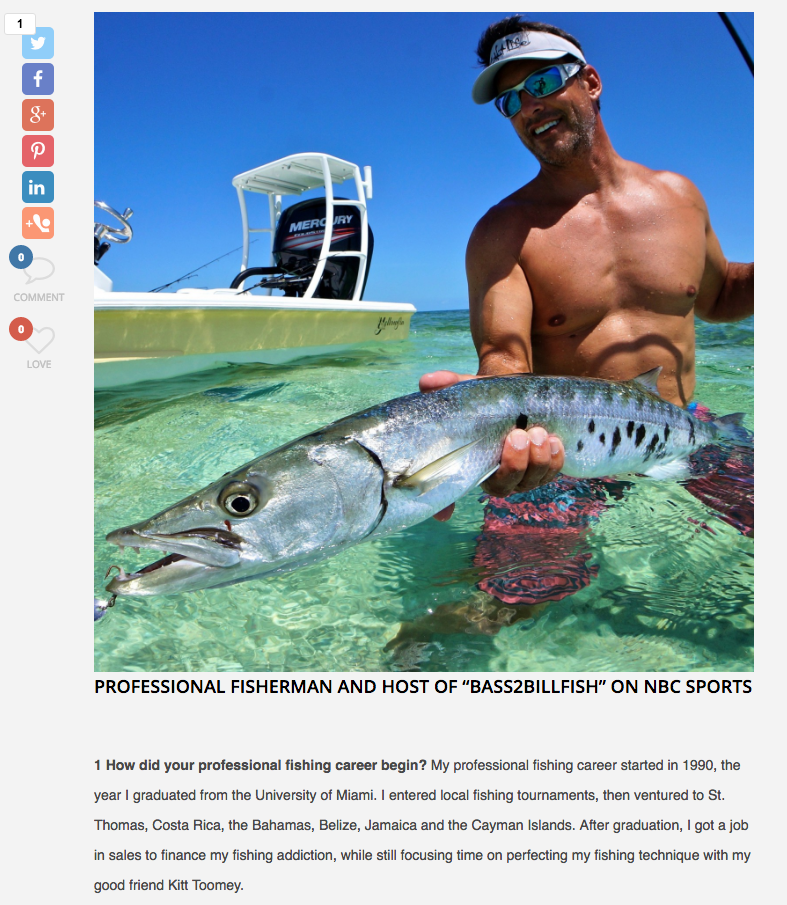 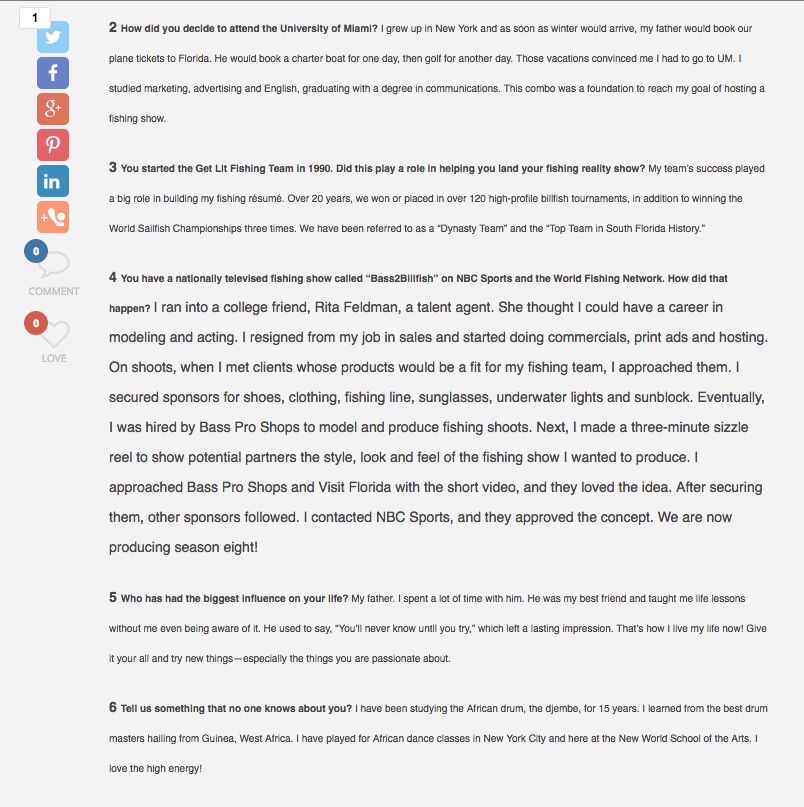 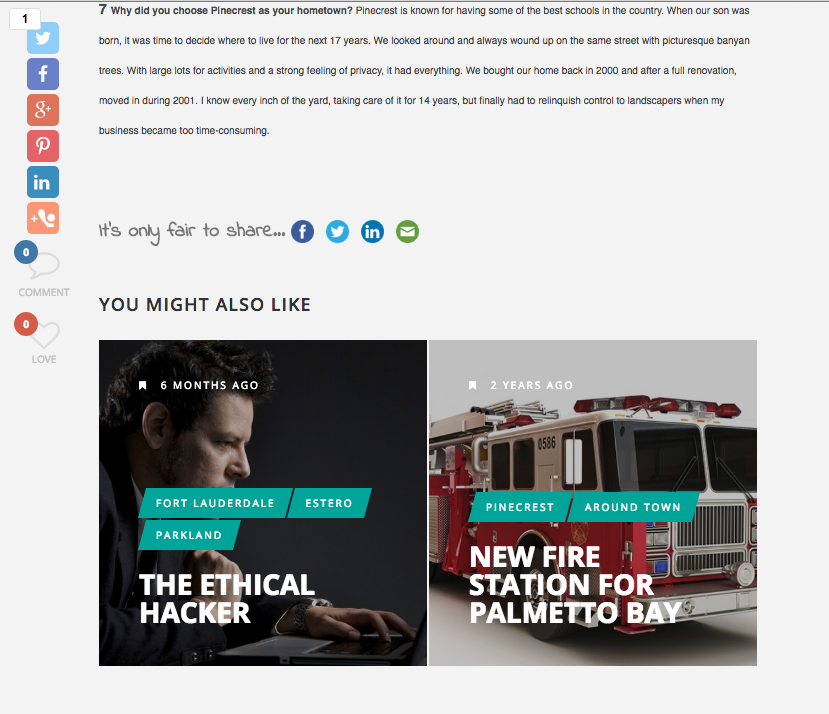 Sometimes when the tide is just right, the tarpon stack up off the beaches of Key Biscayne. Last week was one of those times 🙂

For bait, I am using live crabs. I prefer permit sized…smaller crabs. The great thing about using live crabs and circle hooks is there is no need to set the hook. I prefer to leave the rod in the rod holder, with the drag set moderate to  heavy, so it’s slightly difficult to pull line out. The key is to keep the drag tight during the hookset, otherwise the hook will not be able to penetrate the fish’s jaw. To hook the crab, work the hook gently through the horn, on the side of the carapace (as seen in the video below.)

I prefer to suspend the crab under a cork or bobber, depending on the conditions and depth I’m fishing in. I place the cork or bobber 5-6 feet up from the hook. If the current is ripping too hard, try free lining your crab. The idea is to get the crab looking as lifelike as possible. When I am fishing around Key Biscayne, I drift with the current.

Tarpon are the ultimate inshore game fish and it’s fortunate that here in Florida we have such readily available access to this fishery…without needing expensive tackle or a big boat. One thing that’s important…if you plan on fishing at night make sure you have proper safety equipment and navigational lights.

On April 15th I had the privilege of attending the ChiChi Miguel Throwdown in Destin, Florida 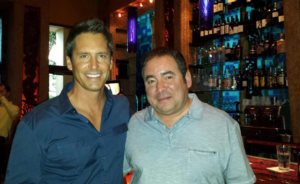 . The event brings together celebrities, winemakers and philanthropists  with the goal of raising funds for numerous Florida Gulf Coast charities. This year, the event raised $700,000! 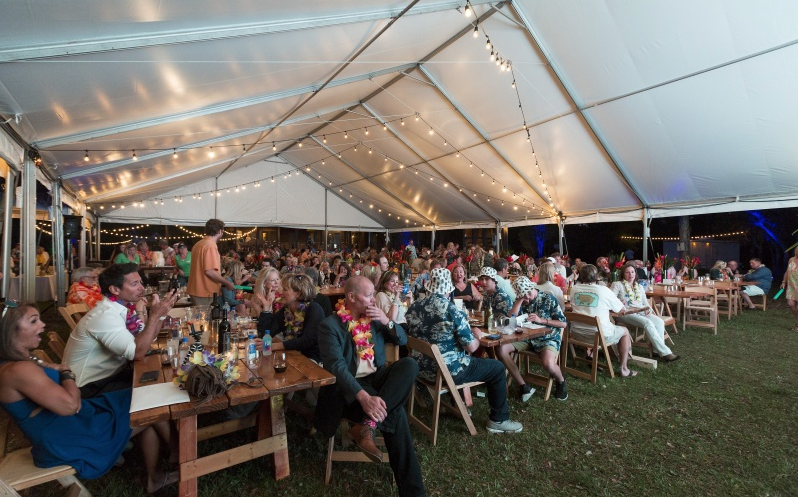 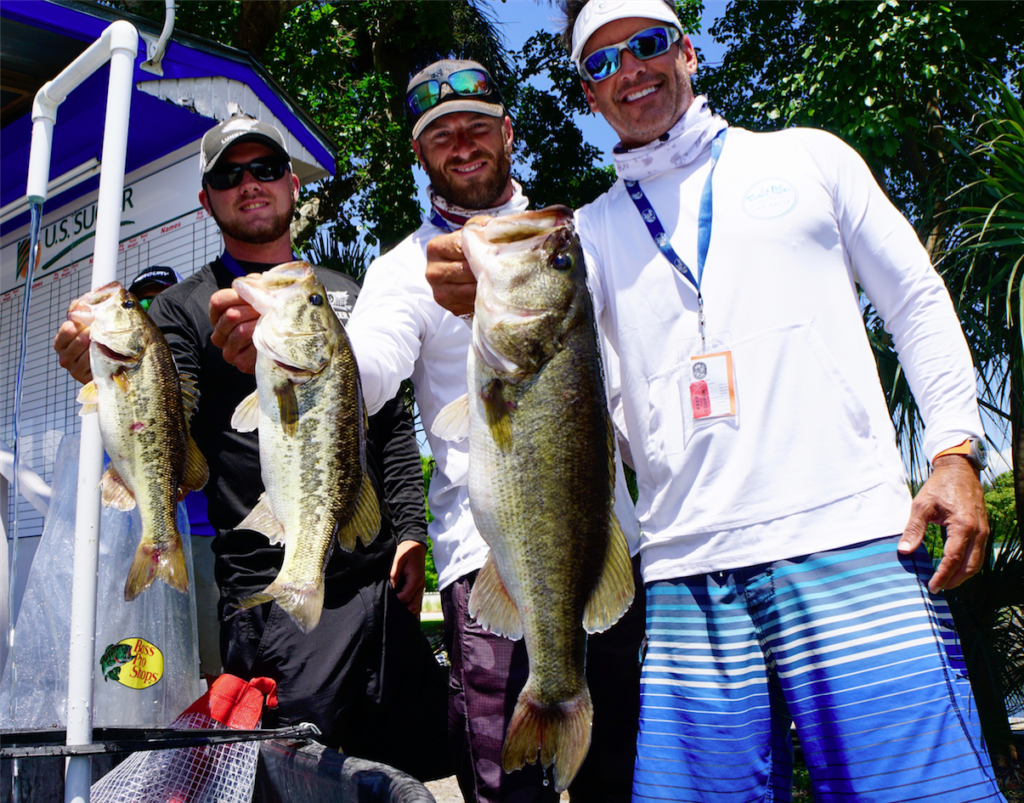 Yesterday I had the opportunity to fish in the 2016 Bass Pro Shops Florida employee’s tournament on Lake Okeechobee. 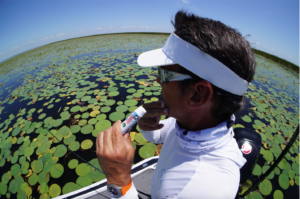 We fished most of the day with topwater plugs (Zara Spooks,) topwater frogs, and also with Senko worms and swim baits like the Gambler Big EZ. 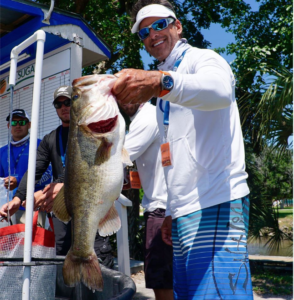 The fishing was slow, but we rallied and managed to catch the 3 fish limit for a total weight of 11 lbs. 7 oz, putting us 6th out of 56 boats!

Thanks so much Brett for putting us on the fish and for Bass Pro’s Mike O’Gorman for giving it his all today.

I had a great time meeting all of the hard working employees from Bass Pro Shops, and loved swapping fishing stories after the tournament. This was a well organized, fun event with a great atmosphere. I can understand why folks love working at Bass Pro Shops…this positive environment makes the customer experience that much better.

Visit www.bassproshops.com to find the lures mentioned in this blog and to find your nearest store. This time of year, the tarpon start showing up in numbers in Biscayne Bay.

For bait, I use blue crabs suspended below a float, on a 7/0 circle hook. Attached to the circle hook, I use roughly 5 feet of 50 lb. fluorocarbon leader.

The fish have been biting on the outgoing tide. This particular night we caught 6. The video below is of the 5th fish. Enjoy!

If you have any questions email me at info@petermillerfishing.com.

I decided to head out for an afternoon of fishing on my new Yellowfin 24 CE bay boat on Thursday, March 31st. The temperature was mild with a stiff SE wind.

First, I stopped to catch some ballyhoo with the cast net. These are one of my favorite baits, and they’re useful for a variety of species like mutton snapper.

After setting up on the edge of a flat, I casted live ballyhoo rigged on knocker rigs with sliding egg sinkers, into the deeper channels.

I didn’t get a bite on the ballyhoo, but 2 300-400 lb. bull sharks swam towards my boat on the edge of the flat. I casted out a small piece of jack and it was game on! Here’s short a clip of me fighting from the tower.

On Saturday, April 2nd I went out for a little solo mission for tarpon and permit with live crabs. I left the dock at 630pm and was back at 930pm. I used light leader…30 lb. fluorocarbon.

Solo mission last night for permit and tarpon. Somehow I managed to catch both. Video to follow on my petermillerfishing Facebook tonight. It's a series of short clips, as I was filming myself lol. @visitflorida Last week I got the chance to try my new Yellowfin 24 CE bay boat out. This boat runs extremely well with my Mercury 300 verado and Raymarine electronics. This boat is over 1,000 lbs. lighter than my previous Yellowfin 24 and it is fast!

I had the opportunity to get out and do some fishing on 3/17. First, I loaded up on bait catching threadfin herring near Stiltsville. I had heard there were some sailfish around, and on this calm day I wanted to head offshore and try to catch one. While heading offshore. I saw a school of BIG jack crevalle busting up the surface underneath a frigate bird…I had to catch one! I tossed out a threadfin herring and it was game on!

On my way offshore, I decided to catch some more bait. I hit the patch reefs just of Key Biscayne and loaded up on cigar minnows and sardines…which turned out to be just what I needed…

Offshore, I ran into a very rare scene. Sailfish balling sardines with dorsal fins out of the water, with the Miami skyline in the background. I have only seen this a few times in my 35 years of sail fishing.

Here’s a video of the sailfish balling bait, sight casting, hooking and releasing a sailfish. Enjoy 🙂 When it comes to wildlife conservation and management, it’s reassuring when a plan-of-action results in a positive outcome. I think the key to success when managing sportfish species is collaboration between recreational and commercial fishermen and the fisheries management organizations that dictate legislature. For me, preserving the world’s billfish species hits close to home. I have been competing in billfish tournaments since 1989 and have won or placed in over 120 high-profile events. Let’s take a look at some of the initiatives that are ensuring the survival of the world’s most coveted family of predatory species.

Conservation by recreational and tournament fisherman

Perhaps the most notable shift in billfish conservation is the advent of circle hooks. Circle hooks have done wonders in regards to release mortality. In 2008, the National Marine Fisheries Service mandated that natural baits must be rigged with circle hooks in all Atlantic billfish tournaments. This is a great example of a management organization working with fisherman toward a goal that ensures the future of our fishery. The Billfish Foundation states: “The use of non-offset circle hooks with natural baits, in place of the more traditional J-hooks, can dramatically increase a fish’s chance of survival.”

Circle hooks are less likely to hook a fish in the gills, stomach, or vital organs. I have been professionally billfishing for more than 20 years and I don’t feel that circle hooks provide a lower hook-up ratio. For the time being, circle hooks are only mandatory during tournaments, but more and more fishermen use circle hooks in non-tournament settings, as well.

Releasing a billfish quickly is another tactic that lowers mortality. The longer the fight, the less likely a fish will be able to recover and the more likely that fish will fall prey to a predator. The idea is to get the fish to the boat as quickly as possible. A combination of aggressive, calculated boat handling, as well as angler and mate cooperation and communication will put the least strain on a fish. Understanding the fish’s movements develops with experience. If you watch a seasoned crew; they seemingly know the fish’s next move. This leads to less time fighting the fish and a shorter end game. On the leader – an astute wireman knows how much pressure will prevent a billfish from going berserk, but the wireman also maintains control. After tagging a billfish; holding and swimming the fish boatside while the captain idles slowly helps ensure that the fish is revived and swims away strongly. If I have a first timer with their first sailfish…I will try to take a quick photo for the mantle. However, we are as careful as possible to not manhandle fish on deck, as this puts strain on the fish’s internal organs.

It’s not only important to protect the game fish. Lower down the food chain, the bait fish or forage fish; do not garner the same conversation as our sport fish. That’s what makes these stocks so vulnerable to overfishing. Forage fish are harvested to manufacture vitamins, fish oil, cosmetics and animal feed. According to the 2008 Annual Review of Environment and Resources; 80% of forage fish caught are fed to animals. That includes fish farms and livestock farms. The impact of depleting forage fish stocks hits close to home for all of us as sport fishermen. Sailfish in South Florida feed primarily on threadfin herring and pilchards. In Florida, 29,365 pounds of pilchards were harvested in 2012. Also in Florida, 1.7 million pounds of threadfin herring were harvested. Neither of these species have accurate stock measurements and there are few rules capping how many are harvested. The International Game Fish Association is working in collaboration with the Florida Wildlife Federation, The Pew Charitable Trust, and the Snook and Gamefish Foundation to raise awareness about the danger of depleting our forage fish stocks. The depletion of forage fish stocks can lead to the collapse of billfish and other sport fish stocks, so it’s important for recreational and commercial fishermen to take notice.

Conservation in legislature and the political arena

Let’s take a look at a piece of legislation that helped restore billfish stocks. In the mid to late

If we look at the last half century, we have taken many steps in the right direction and a few steps backward, in regards to billfish conservation. I think the most impactful initiative for conservation is monitoring billfish migration patterns by groups such as The Billfish Foundation. This research helps raise international awareness and influence legislature that will prevent overfishing, as well as prevent fishing in spawning areas.

To learn more about The Billfish Foundation (TBF) visit: www.billfish.org

Learn more about our forage fish and protecting them visit floridaforagefish.igfa.org

To learn more about the International Game Fish Association (IGFA) how you can help preserve our world’s sportfish visit: www.igfa.org