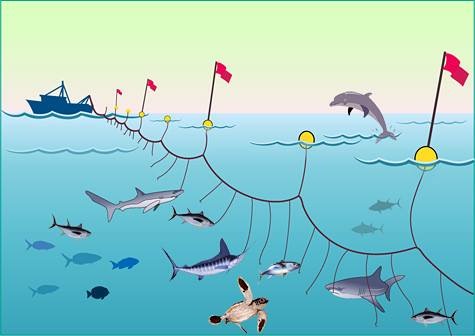 Click here to submit comments to your governor, senators and representatives to make a difference: http://www.billfish.org/news/submit-comments-efp-fl-elected-officials/
On August 10, the National Marine Fisheries Service (NMFS) announced it’s approval of the Exempted Fishing Permit that allows longline boats to fish in Florida’s east coast closed zone.
This puts the recreational fishing industry that I work so hard to promote and protect, in danger.
Long lines are fishing lines that are miles in length, and have have thousands of hooks attached, set by commercial fishing boats.
With this new approval, commercial boats will now be allowed to set their long lines in a formerly closed fishing area off Florida.
I have fished all over the world and I have seen the problems with longlining. The amount of by-catch and loss of marine life is tremendous. Longlines hook marlin, sailfish, sharks and tuna…they kill indiscriminately. It’s not just fish, turtles, dolphins and whales are also accidentally hooked by longlines.
I also witnessed the decline and recovery of the sword fishery off South Florida. When I first started fishing, a swordfish was rare. When longlining was banned off of Florida’s east coast. I witnessed first hand, the comeback of the species into a thriving fishery, that attracts visitors from around the world.
Recreational fishing is tremendously important to Florida’s economy. In Florida, recreational fishing has an economic impact of $7.6 billion dollars, and the industry supports 109,300 jobs. This includes hotels, restaurants, fishing licenses, captains, airline tickets etc.
The world is not aware of how destructive longline fishing is. If the National Marine Fisheries Service is so confident on their decision, we should be allowed to film the setting of these longlines, along with retrieval, to show the world what indiscriminate decimation of the ocean looks like first hand.
There are no secrets anymore. All signs indicate this is a horrible decision that sets a tone that will one day wipe our ocean clean.
We have one planet…let’s be smart and take care of it.

Florida has more anglers than any other state in the nation, 2.4 million, and the related industry generates an economic impact of $7.6 billion dollars (2015/16) and supports 109,300 jobs! This is a slap in the face of all connected to recreational fishing in Florida especially after strong opposition was expressed by the industry and community participants. This decision could have a negative impact on Florida’s wide ranging marine tourism.
Ellen Peel, president of the Billfish Foundation stated:
“She was not surprised, though held out some hope, the NMFS would realize allowing longlines back into Florida’s east coast closed zone to land the conservation benefits accrued over 16 years of closure would be illogical. The NMFS has accommodated the one scientist at NOVA, who filed for the permit, project after project, regardless of prior results or inappropriateness of this project. The hypocrisy of the situation is blatant for the scientist, along with the owner of many of the longline boats that will fish in the zone, were part of a CNN interview in 2012 in which they made the argument that longlining was not a clean gear and should be replaced by buoy gear. Now that the scientist and boat owner can sell the conservation benefits their story has changed. The longlines will kill billfish, swordfish, sharks and sea turtles. Be prepared, the NMFS, HMS may issue more restraints on recreational fishing so there will be more fish for the “research longlines” to kill if illogical thinking continues. Keep in mind that the State of Florida’s Fish and Wildlife Conservation Commission opposed the permit being issued.”